Published in the La Crosse Tribune

A Minnesota atheist and a local pastor will go head to head Sunday and debate whether a person can be good without God.

The La Crosse Secular Student Society and the La Crosse Area Freethought Society will host a morality debate at the University of Wisconsin-La Crosse to show both perspectives on basic religious questions. The deliberation will feature Dr. Scott McMurray, pastor at Faith United Methodist Church, and August Berkshire, past president of Minnesota Atheists.

Hank Zumach, president of the La Crosse Area Freethought Society, said the series of debates was created because serious, religious questions are often not debated. And if these kinds of questions were discussed, they were likely done in private rather than in public.

“The point of the debate has been to raise these kinds of questions because we’re at a point here in our society where religious groups of one kind or another have been more active than in the past,” he said. “Having these sorts of debates out there gives people an opportunity to see both sides.”

The debates also allow people who are firm in their beliefs to discover why they trust what they trust. People often believe in something because it’s what they learned as a child and they rarely consider the opposing side, Zumach said.

“If you sincerely believe and there’s never been any questions that religion is a positive force in society, why would anybody not believe that?” he said. “Well, there are many reasons why that would be questioned. It’s the opportunity to hear perhaps the other side of what you have been taught or heard your whole life.”

After attending morality debates in the past, McMurray decided to step up and represent the Christian point of view this year. He said he liked the idea of “exchanging ideas in mutual respect” and saw the debate as an opportunity to spread the word of God.

“As a Methodist preacher, you take every opportunity to get a chance to proclaim the Gospel,” he said. “This is what’s led me.”

McMurray will refer to the Bible and present-day issues to argue that people cannot be good with God.

Berkshire, on the other hand, will argue that God isn’t real.

“We evolved as a social species,” he said. “It was to our benefit to cooperate (with each other).”

Berkshire has been a part of the Minnesota Atheists since 1984 and remains an active member of the atheist community. He debated whether God existed during the 2010 morality debate in La Crosse.

“The problem with basing your morality on God is if you lose your God you lose your basis for morality,” he said. “I’m here to say don’t worry about it.”

Religion is Unnecessary for Morality

Published in the La Crosse Tribune.

At 7 PM on October 20th, in the Cartwright Center at UWL there will be a debate between an atheist and a pastor titled, “Morality: Can we be good without God?”

This topic was chosen because possibly the most common question non-theists are asked is, “How can you be moral without god?” Atheists are underrepresented in prison populations, and countries with a majority of nonbelievers (Sweden, Denmark, Japan, etc.) have much lower rates of violent crime, are less corrupt, and are generally happier than the most religious nations. While nonbelievers are just as moral as believers, if not more so, many theists cannot seem to make sense of this established fact.

Many books have been written about morality, and some have appropriately divorced it from the misappropriated authority religion claims. Two such books are Shermer’s “The Science of Good and Evil”, and Harris’ “The Moral Landscape.”

Morality concerns how living beings interact with each other. A universe absent living beings would be absent of morality for this reason. Further, morality concerns actions only. While some religions try to tell us that thoughts can be immoral, only if thoughts result in actions affecting another being do they have moral implications. As a society we agree on this, as evidenced by the absence of “thought crime” laws.

However, morality is typically not black and white, rather many shades of gray. In a criminal trial, we consider all kinds of information when determining guilt, including motive, intent, and mitigating circumstances. Because of this, it may be difficult, or even impossible, in a given situation to determine what the “best” action may be, however that does not mean that we are unable to analyze the options available to us and determine which actions are morally superior to others.

Moral decisions can be compared to a game of chess. There are certain moves that are objectively bad, and others that are better, because there are rules governing play, and a goal to the game. Similarly, in life there are a finite number of actions one may take in any given situation — some are objectively more moral, or better, than others. For instance, choosing to starve your child rather than feed him or her is immoral; society agrees on that, and we don’t need to consult a holy scripture to know it.

Recently, an Islamic court in Dubai sentenced tourist Marte Deborah Dalelv to 16 months in jail for having sex outside of marriage. The twist to the story is that her only crime was in being raped. This is the kind of lunacy we often see when religious moral codes are dogmatically enforced, whereas a secular moral accounting of this punishment shows just how absurd it is. Similarly bizarre rules can be found in the Bible (Deut 22: 23-24 & 28-29).

Those who wish to maintain morality’s divine origin must contend with the Euthyphro dilemma, which asks whether something is morally good because god says so, or whether things are moral or not of their own merits and god simply relays to us their moral status. If we assume the former, god could decree today that stabbing your children was moral, and we would have to conclude it was so because god said it. Unlike Abraham, the founder of the 3 major religions, I find this kind of “Might-makes-right” thinking unacceptable and untenable. So we are left with the latter arm of the dilemma, which means god is merely acting as messenger, telling us what is good or not. This would mean morality transcends god, thereby rendering god unnecessary for us to make moral decisions.

Nonreligious men and women all over the world are beginning to step forward and rightfully claim the superiority of secular morality. We find nothing admirable in complying with a voice in your head that tells you to murder your son, nor in jailing women for the “crime” of being raped, nor in denying homosexuals equal rights. We will not condone killing those suspected of the nonexistent crime of witchcraft, nor in issuing death warrants and rioting over men drawing a cartoon or arresting others for insulting Islam on Facebook.

The nonreligious are discovering their voice, and the ethereal and vaporous moral justifications religions offer will not sate their appetite for meaningful moral conversations and tangible justice.

Those who are interested in hearing the subject explored further are encouraged to attend the free aforementioned debate, where audience questions will be encouraged following the event.

Debate: Can we be good without God? 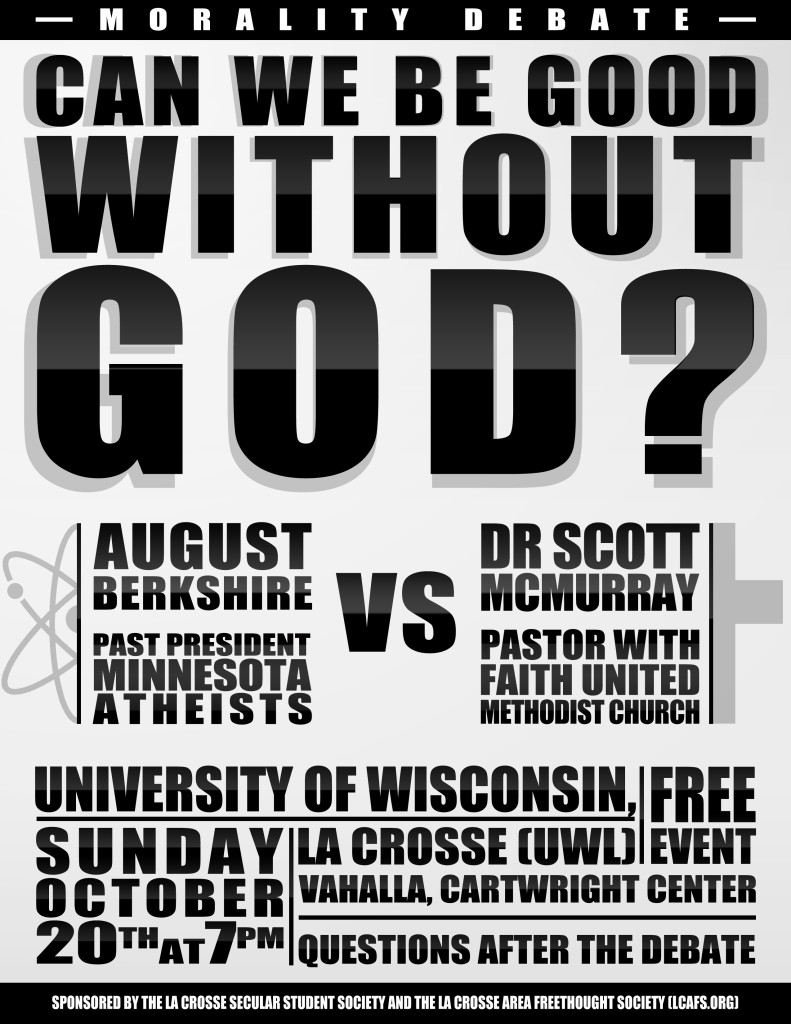 Expect some fire and brimstone at this debate, but it won’t be a pre-election fracas.

Preacher-turned-atheist Dan Barker appears ready to stoke the fire when he squares off against philosophy professor Eric Kraemer on the question “Is Religion a Positive Force in Society?” Thursday at the University of Wisconsin-La Crosse. […]

For more details about the debate, please click here.

Debate: Is Religion a Positive Force in Society

Excerpts from the Debate 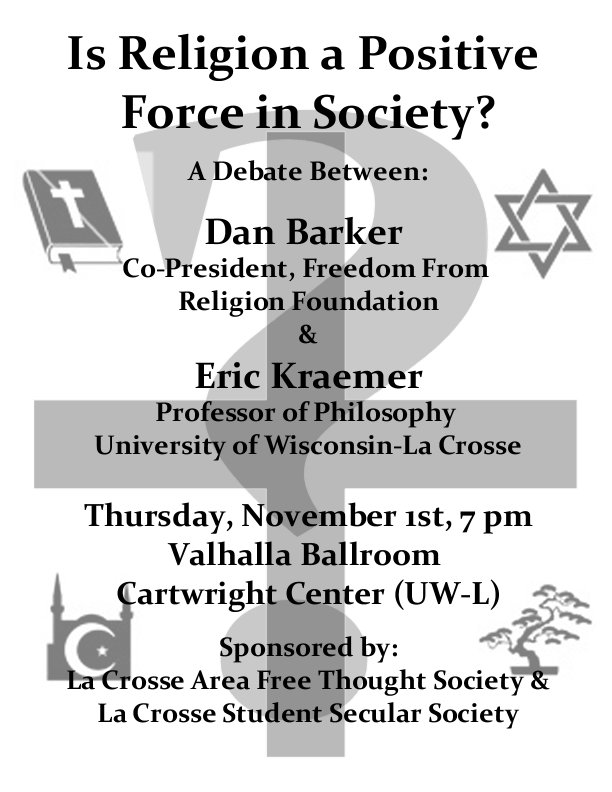 Separation of Church and State

10/26/2011- A debate between Dan Barker, co-president of the Freedom from Religion Foundation, and Dr. Paul Helseth, Northwestern College Associate Professor of Christian Thought

On November 16, 2010 the La Crosse Area Freethought Society co-sponsored a debate with the Christian Faculty Group and the La Crosse Secular Student Society (LS3). Another very successful endeavor, drawing a very large crowd. Much thanks to Mark Chavalas and his family and Sarah Sodemann for their successful promotion of tHe event.

10/26/2008- The La Crosse Area Freethought Society (LCAFS) and the Campus Crusade for Christ co-sponsored a debate on the topic: “The Bible: Fact or Fiction? Is the Bible Reliable?” The two individuals that were selected to debate this topic were Dan Barker and Dr. Mark Chavalas. The event was held on Sunday, October 26, 2008, in the Valhalla auditorium of the Cartwright Center on the University of Wisconsin- La Crosse Campus. The event was a huge success, drawing a standing room only crowd, with the number of attendees estimated at over 800.

Dan Barker is co-president of the Freedom From Religion Foundation out of Madison, WI. He is a prominent atheist who used to be a pastor. After becoming ordained, Dan Barker served in a pastoral capacity in three California churches. For 19 years he enthusiastically participated in evangelical preaching, missionizing, evangelism and Christian songwriting. Dan has written more than a hundred Christian songs which are either published or recorded by various artists, and two of his children’s musicals continue to be best sellers around the world. After a period of intensive study and introspection, Dan Barker “threw out the bathwater and discovered there is no baby there.” His books include, “Losing Faith in Faith: From Preacher to Atheist,” and the newly released “Godless: How An Evangelical Preacher Became One of America’s Leading Atheists.” Dan, and the Freedom From Religion Foundation (FFRF), have been involved in the La Crosse area. Several years ago, the FFRF was involved in the case against continuing to allow the 10 Commandments monument to be displayed on public land in downtown La Crosse, and was more recently involved in the Holmen cross controversy.

Dr. Mark Chavalas is a member of the Department of History at the University of Wisconsin-La Crosse, where he has taught since 1989. He received his PhD at UCLA, where he specialized in ancient Near Eastern History and languages. He is particularly interested in relations between ancient Mesopotamia and Israel. He has participated in nine seasons of archaeological fieldwork in Syria, especially at the site of Terqa, an Amorite city on the Euphrates River during the mid-second millennium B.C. Among his publications are the co-edited “Mesopotamia and the Bible (2002)” and co-authored, “Bible Background Commentary: Old Testament (2000).”